My Top Ten Greyhound Stories for 2011 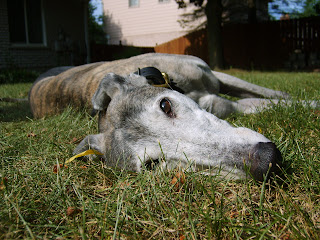 A lot has happened in the greyhound world over the last year. Greyhound protection advocates have won powerful victories, but also suffered heartbreaking defeats.

Below, you will find my top ten list of greyhound stories for 2011.

In July, Pennsylvania Governor Tom Corbett signed House Bill 67 into law, which prohibited greyhound simulcast gambling in the state. The measure was unanimously approved by lawmakers, and was supported by Citizens Against Greyhound Racing. 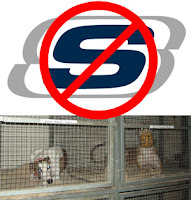 Skechers raised the ire of humane minded citizens in November when they partnered with Mark Cuban to film a Super Bowl advertisement at Tucson Greyhound Park. A Skechers executive later backpedaled, telling GREY2K USA that "we don't even know if that footage we (sic) ever appear in a commercial." Despite this retreat, the company has not yet pledged to pull the ad.

8. More evidence is uncovered of cruelty and neglect at Tucson Greyhound Park.

Tucson Greyhound Park is one of the most notorious dog tracks in the world, and their poor reputation was repeatedly reinforced in 2011. 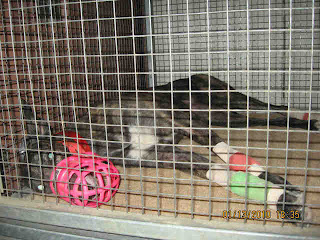 Most notably, the terrible confinement greyhounds endure at Tucson was again highlighted when we received photographs that were taken by a Pima County investigator. These photographs documented kennel conditions that are nearly identical to what our investigators found in 2010. Hundreds of greyhounds live in small cages at the track, in dark warehouse style kennels. Most of the dogs are muzzled in their cages.

In addition to this evidence of greyhound confinement, several documented cases of neglect occurred at Tucson Greyhound Park in 2011. In June, a kennel inspection revealed poor conditions. According to the report:

The kennel also "could not produce a log" indicating the ultimate fate of greyhounds that had raced for the kennel. Finally, the trainer responsible for the dogs, Willard J. Eyler, refused to sign the inspection report. 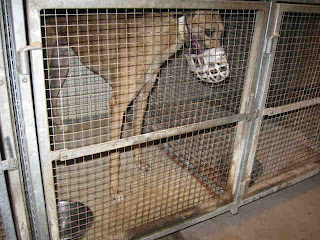 In September, a greyhound trainer was fined $1,000 by the state for "failing to turn out and care for the greyhounds" in the kennel he worked in. According to state records, the dogs were not let out of their cages to relieve themselves for at least eight hours before a state investigator discovered the problem. A few days later, another trainer was fined $100 after he brought four greyhounds to race with an "excessive amount of fleas."

As long as Tucson Greyhound Park remains open, dogs will suffer and die at this facility.

Because this was a special election the seat is up again at the end of this year, and it appears likely that we will see another Tomblin versus Maloney race.

6. Greyhound advocacy blossoms all over the globe.

Across the world, more advocates fought for greyhound protection in 2011 than ever before. In India, Beauty Without Cruelty is continuing to fight the legalization of dog racing in Punjab. Their effort this year included a petition representing more than four million individuals.

Other groups speaking up for greyhounds include Animals Australia, Animals Asia, Greytexploitations and the Greyhound Protection League of New Zealand.

In August, greyhound protection advocates won a major victory when a special commission recommended against legalizing greyhound racing in South Africa. GREY2K USA President Christine Dorchak had previously met with representatives of the commission and provided input, and we were gratified when they made the humane choice.

5. The world waits for the Canidrome's decision in the Rescue Brooklyn campaign. 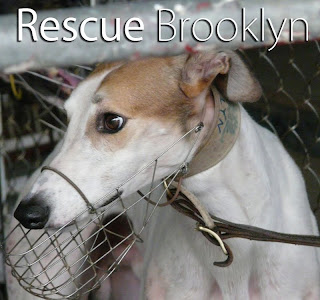 Every year, hundreds of greyhounds are exported from Australia to the Canidrome in Macau, where they will eventually die after racing at the track. This ongoing tragedy led GREY2K USA to ask for the release of a single dog, named Brooklyn. If the track allows it, we intend to send Brooklyn back home to Australia where he can be adopted out.

The attempt to Rescue Brooklyn is a test case, to see if all the Canidrome dogs can be helped. So far, the track has not answered our request. The entire world is watching to see how it responds.

4. Thousands of greyhound injuries are documented in West Virginia and Texas.

In February, the Charleston Daily Mail reported that more than 3,000 greyhound injuries have been reported at Tri-State racetrack since 2005. This story was based on research from GREY2K USA, and led to a subsequent pro-greyhound editorial by the Daily Mail Editorial Board. In part, the editorial read:

It's repugnant that injuries are the part of the nature of the sport. Greyhounds are fast but fragile, and races involve much bumping ... Why does the state continue to allow such a gruesome sport?

Meanwhile, in October the Houston Chronicle reported on greyhound injuries at Gulf Greyhound Park. Their front-page story cited GREY2K USA research which shows that more than 1,300 greyhound injuries have been reported at Gulf since 2008. During the same period, 49 greyhounds died or were euthanized at the track.

In Florida, a bill to decouple greyhound racing from other forms of gambling passed by large margins in both the House and Senate, but failed on the last day of session when the two chambers could not agree on relatively minor differences. The Florida decoupling bill would have helped thousands of greyhounds, and started the process of ending dog racing in the Sunshine state.

Although the measure ultimately did not become law, greyhound protection advocates won the substantive debate and educated lawmakers about the dog racing industry. Similar proposals were also considered in Iowa and Arizona.

I expect greyhound decoupling to be considered again in all three of these states in 2012, and am optimistic that these proposals will become law.

In early December, GREY2K USA released the first-ever report on greyhound racing in Florida. The report was made possible in part by a grant from the American Society for the Prevention of Cruelty to Animals, and provides a look inside Florida's thirteen dog tracks.

Across the state, as many as 8,000 greyhounds endure lives of terrible confinement and suffer serious injuries. Also, since 2004 there have been at least nine severe cases of neglect at Florida dog tracks and associated kennel compounds.

The public now has more information about greyhound racing in Florida than ever before, something that should result in positive action for the dogs.

Finally, my top greyhound story for 2011 occurred in October when greyhound trainer Ronald Williams plead guilty to 39 counts of animal cruelty. He had been arrested the previous year last year after law enforcement authorities discovered dozens of dead greyhounds in his kennel at Ebro Greyhound Park. According to state officials, the dogs died from starvation, dehydration, or asphyxia.

Williams was sentenced to five years in prison for each charge, with the sentences to run concurrently.
Posted by CTheil at 10:39 AM