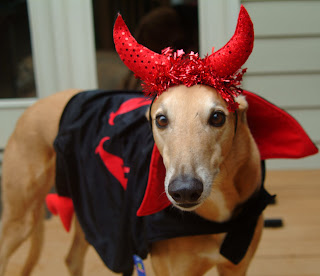 Last Spring, dog racing supporters engaged in a campaign of smear tactics while trying to defeat a commonsense proposal to decouple greyhound racing in Florida. They even went so far as to call State Senator Maria Sachs, a sponsor of the bill, a "condescending cow."

Thankfully, their smears had little impact on the legislative debate. Over their objections, greyhound decoupling bills passed overwhelmingly in both the State House and Senate, and nearly became law. This year we are working even harder to pass these important measures, which will help thousands of greyhounds in the Sunshine State.

Meanwhile, at the same time that we are renewing our fight to help Florida's greyhounds, greyhound breeders have unleashed a new wave of smears. In fact, their angry rhetoric is even more off the rails now than it was last time greyhound decoupling was considered.

For example, earlier this afternoon a greyhound trainer named Davina Filapelli posted on an internet message board that she would like to "slap" renowned actress and GREY2K USA supporter Betty White. Specifically, she wrote:

"Don't you just want to slap her!"

Unfortunately, Betty White is not the only target of these latest smears. In another message that was posted last night, a former greyhound trainer expressed his anger that the ASPCA is supporting our work to help greyhounds in Florida:

"It seems that the once reputable ASPCA has been infiltrated by the Animal Rights nuts and grifters."

Perhaps the most outrageous smears, however, have been directed at GREY2K USA co-founder Christine Dorchak. Christine is an inspiration to everyone who works at GREY2K USA, partly due to the fact that she and her dog Kelsey survived a catastrophic, near-fatal train accident in 1992.

You would think that even greyhound breeders would agree this personal tragedy is off limits. Sadly, that is not the case. In fact, only three days ago a greyhound trainer named Chris Grieb posted the following message on Twitter:

"Christine. Btw... when do you plan on walking in front of a trolley again?"

The following day, another dog racing supporter named Leslie Csokasy posted a news story about Christine's accident on an industry bulletin board and wrote:

Without a doubt, greyhound breeders have restarted their smear campaign because they know we are closer than ever to ending the cruelty of dog racing. I am proud of the support we have from mainstream opinion leaders like Betty White and the ASPCA, and am confident that our best days are ahead of us.
Posted by CTheil at 3:03 PM