Florida is Focus of Global Fight to End Dog Racing 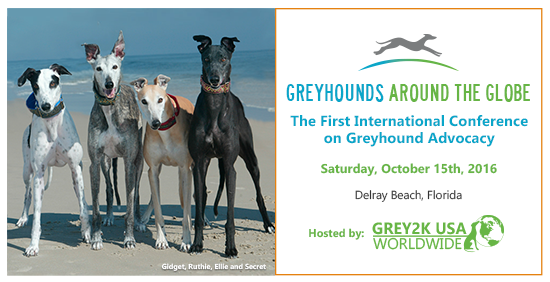 This weekend, Palm Beach County in Florida will become the focus of the global effort to end greyhound racing. Two dozen top animal welfare experts from across the world are joining together in Delray Beach to hold the first ever international conference on greyhound advocacy, named Greyhounds Around the Globe.

Commercial dog racing is now conducted at 146 racetracks in eight countries. Greyhounds routinely suffer racing injuries at these tracks including broken legs, broken necks, dislocations, torn muscles and paralysis. Some dogs die while racing while others are put down due to the severity of their injuries, or simply because of their diminished value as racers. More than 12,000 injuries have been documented in the U.S. alone since 2008, and in Florida a racing greyhound is dying every three days, on average.

In New South Wales, Australia, recent governments report shows that thirty-nine dogs were killed while racing in just over two months, and that 70% of all racing dogs may have been destroyed over the last dozen years, as either puppies or failed racers. At the Canidrome in Macau, the only legal dog track in China, greyhounds receive little or no veterinary care and are routinely killed at a rate of thirty per month. Because there is no adoption program, no dog gets out alive. In the countries of Great Britain, Mexico, Ireland, Vietnam and New Zealand, records are still not publicly disclosed, so the number of greyhound injuries and deaths remain an industry secret.

A worldwide movement has emerged to fight this cruel industry, and we are gradually winning. Grassroots advocates have linked arms with established animal protection groups like The Humane Society of the United States, RSPCA Australia, Animals Australia, Animals Asia, Anima Macau, the British RSPCA and the ASPCA. This coalition is fighting for a phase out of commercial dog racing, while also advocating for key industry reforms.

Just in the last year, we have won stunning greyhound protection victories. In May, Arizona became the 40th American state to outlaw greyhound racing. The largest Australian state, New South Wales, voted to prohibit dog racing in August. Although the government has since decided to allow a small remnant of the industry to temporarily survive, dozens of tracks are still slated to close. Also in August it was announced that the last dog track in London, iconic Wimbledon Stadium, is permanently closing. Meanwhile, the Macau Canidrome is in the process of shutting down after the government refused to extend its land lease.

Florida has become the epicenter of this global fight, and humane advocates are starting to win victories in the Sunshine State, too. In March, lawmakers passed a budget proviso requiring the Department of Business and Professional Regulation to report greyhound injuries to the public for the first time. The dogs won again this summer when Seminole County Commissioners approved the Greyhound Protection Act, a local citizens initiative to require greyhound injury reporting, require reporting on the ultimate fate of racing dogs, and eliminate a loophole that exempted greyhounds from County licensing and inspection laws.

We realize our historic conference is taking place only twenty miles from Palm Beach Kennel Club, the preeminent commercial dog track in the world. To its credit, Palm Beach has directed its attention to some humane issues and recently announced a series of adoption events in the month of October. Nevertheless, it is not immune from the culture of cruelty that permeates the greyhound industry. According to state records, 25 dogs have died at Palm Beach since 2013. To ensure the track has a ready supply of racers, hundreds of greyhounds endure lives of confinement, kept in cages barely large enough for them to stand up or turn around for long hours each day.

At the conclusion of our conference, our coalition will send a letter to the heads of states of the eight countries that still host commercial dog tracks. We will urge them to support legislation to end greyhound racing and tell them that dogs deserve better. It is time for this cruelty to end in Florida, the state where it started, and worldwide.
Posted by CareyTheil at 1:13 PM 2 comments: 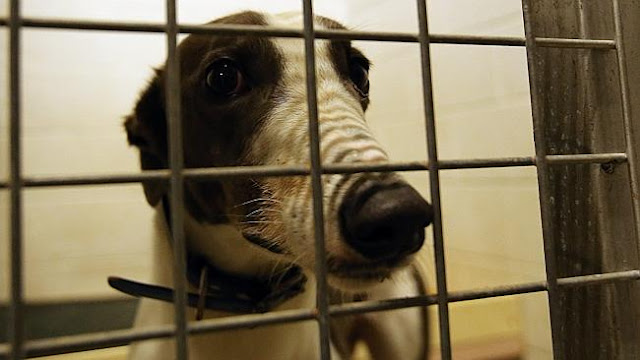 We are holding a winning hand, and must stand together in solidarity as we fight for the freedom of these gentle dogs. Today is about our frustration and grief over a bad government decision that will harm greyhounds. But tomorrow must be about our resolve, and a commitment to be even stronger advocates for greyhounds.
Posted by CareyTheil at 2:57 PM 3 comments: