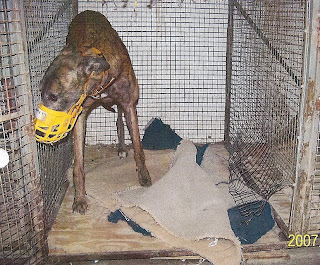 Last October, Ebro Greyhound Park made international headlines when a greyhound trainer named Ronald Williams was arrested and charged with 42 counts of felony animal cruelty. According to state investigators, dozens of dogs in the control of Williams were severely neglected and many died from starvation, dehydration or asphyxia.

Sadly, this is not the only humane problem that has been documented at the Ebro dog track. According to state records we recently obtained, between May 21 and July 5 of this year a total of 28 greyhounds suffered "substantial" injuries at Ebro, and ten greyhounds were euthanized.

In just the first week of racing at the track in May, ten greyhounds suffered broken legs and three greyhounds were euthanized.

This is the first injury data we have ever seen for Ebro Greyhound Park. Unlike other states, Florida does not require that greyhound racing facilities report injuries to the public. Additionally, when the track was asked about these fatal injuries, they refused to provide state investigators with video footage of the races in question.

When you also consider the documentation we just released on serious injuries at Orlando Greyhound Park, a clearer picture of dog racing in Florida is coming into focus. At tracks across the Sunshine State, large numbers of greyhounds are suffering serious injuries.

As tragic as the Ronald Williams case was, we should not overlook the greyhounds who are continuing to suffer and die at Ebro and other tracks. These dogs need our help, regardless of whether their deaths make international headlines. That is why we must redouble our efforts to pass a greyhound decoupling bill in the next legislative session. The passage of greyhound decoupling will significantly reduce greyhound injuries, and will be the first step in giving these dogs the help they deserve.