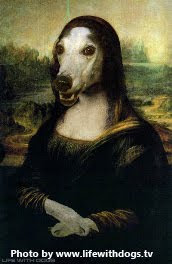 I thought I had heard it all.

As executive director of GREY2K USA, I have heard dog racing apologists make every excuse and rationalization imaginable in an effort to defend their cruel industry. They have said that greyhounds like to live in their cages, and that broken legs are no big deal. They have even suggested that greyhounds aren't dogs at all.

Even I was shocked, however, by the incredible doubletalk that Tucson Greyhound Park (TGP) CEO Tom Taylor used last December to defend the kennel conditions greyhounds endure at his track. After he was shown footage that was taken at TGP by GREY2K USA investigators, he claimed that they "saw what they wanted to see" and said that TGP is an "ideal place for dogs."

KOLD News couldn't verify his claims, however, because he refused to allow them into the kennel compound. He said he denied them access because they would "show it to thousands of people, and we don't know how they're going to take it."

Then, his defense of dog racing went from strange to outright bizarre. He said that "I could show you the Taj Mahal and people would say that's too, uh, religious." Even this, however, was apparently not bizarre enough for Taylor, who then added "Hey, I could show you a picture of the Mona Lisa and you could say 'Oh, that's horrible.'"

Of course, at the time of this interview I knew Taylor was not telling the truth. Our investigators had just documented terrible conditions at the Tucson track. At TGP, greyhounds live in darkness. They are kept in warehouse-style kennels in small cages barely large enough for them to stand up or turn around. Most of the dogs our investigators observed were muzzled in their cages. 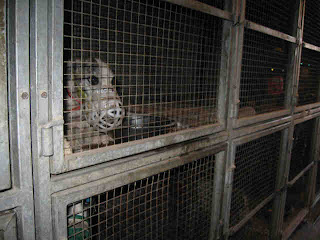 After KOLD TV reported on our investigative footage last December, I forgot about Tom Taylor's bizarre interview. I was reminded of it again, though, a few weeks ago when we received documents and photographs from the Pima County Animal Care Center. It turns out that a County investigator has inspected TGP several times over the last year, and taken photographs of the kennel compound. The photographs she took are nearly identical to the footage taken by our investigators, and document the same problems.

When we received these photographs, I asked our Communications Manager Danielle Festa to contrast Tom Taylor's interview with the photographs taken by the County investigator. The result is our new video, "Dog Track CEO Caught Lying."

Greyhounds are still suffering at Tucson Greyhound Park, and need help more than ever. Just yesterday, the Tucson Weekly newspaper reported again on the track's unwillingness to abide by a local ballot question passed in 2008 that mandated better conditions for racing dogs.

Please watch our new video, and forward it to everyone you know. I am confident that we will soon end greyhound racing in Arizona, but we can only do it with the help of everyone who cares about these dogs.