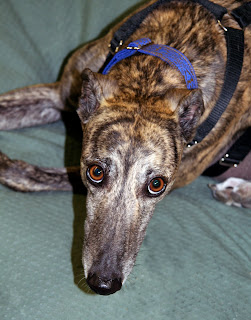 You always know elections are too close to call when the mud starts to fly.

This morning, a "reporter" for the Martins Ferry Times Leader named Stan Pawloski published a laundry list of smears and innuendo regarding GREY2K USA and gubernatorial candidate Bill Maloney. Here are the facts:
Unfortunately, greyhound breeders are attempting to use Mr. Rae's arrest to smear our work to help greyhounds. "Reporter" Stan Pawloski is actually a supporter of greyhound racing and gubernatorial candidate Earl Ray Tomblin. On September 15, Pawloski urged greyhound breeders to vote for Tomblin on a message board used by the dog racing industry. Specifically, he wrote:

"The attack ads on Tomblin and his family have been non-stop in the past few days. Malony definitely is taking aim at greyhound racing. Hundreds of jobs are on the line ... please register if you haven't and vote for Tomblin. If registered, make sure you get to the polls on election day and vote for Tomblin."

In another message on the same message board dated May 23, Pawloski thanked greyhound breeders for donating to the Tomblin campaign:

"Hats off also to all others who have stepped to the plate for Gov. Tomblin."

It is not surprising that greyhound breeders would try to use Mr. Rae's arrest as way of slinging mud with only days to go in the campaign for West Virginia Governor. It is disappointing, though, that a supposed member of the media would be so reckless with the facts. Mr. Pawloski's newspaper even seems to have altered a photo of me to make it appear somehow illegitimate.

Finally, my heart is broken by the fact that the greyhounds are being lost in this debate. If the allegations against Mr. Rae are true, the dogs were once again used by someone in an attempt to enrich himself. Further, the real story here is the live lure case in Texas. The documents related to this case show a side of the greyhound racing industry that was supposedly long over:

TIMMY TITSWORTH: Two rounds. And then let them fight it. I don’t want to kill him.

TIMMY TITSWORTH: Are they looking?

TIMMY TITSWORTH: Back it up some. Get ready to push.

I am confident that West Virginia voters will see through this smokescreen, and cast a vote based on the facts. It should tell them something that greyhound breeders would go to such lengths to distract voters and keep their multi-million dollar subsidies in place.
Posted by CTheil at 11:55 AM