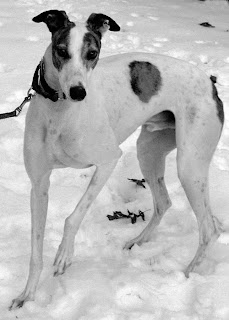 The first win came yesterday, when the Pennsylvania House of Representatives passed a bill to prohibit greyhound simulcasting by a unanimous vote of 200 to 0. This vote sends a clear message to lawmakers across the country that no form of gambling on dog races should be allowed. The measure now goes to the State Senate, which overwhelmingly supported a prohibition on greyhound simulcasting just last year. Humane advocates from across the country owe a debt of gratitude to Citizens Against Greyhound Racing and its President Ann Bradley, who is leading this important effort.

Meanwhile, in Arizona the House Commerce Committee today voted to advance a bill to significantly reduce greyhound racing at Tucson Greyhound Park. HB 2536 immediately reduces the live racing requirement for Tucson Greyhound Park to 100 days, down from 50 weeks, and also contains a provision that could allow the number of greyhound races to be reduced even further. The passage of this bill would be a major step forward, and would result in fewer greyhound injuries and fewer dogs living in confinement. Board President Christine Dorchak and board members Caryn Wood and Karyn Zoldan will be at the capitol in Phoenix all day tomorrow lobbying for the greyhounds. 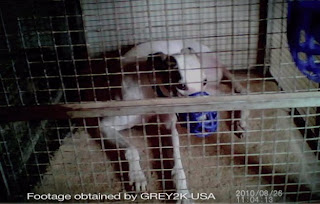 Greyhounds live a sad life at Tucson Greyhound Park. A recent GREY2K USA investigation proved that dogs are kept in warehouse-style kennels, in rows of stacked cages that are barely large enough for them to stand up or turn around.

The dogs our investigators observed lived in darkness, and most were muzzled perpetually. That is why we must keep fighting until greyhound racing ends permanently in Arizona.

Everyone who cares about dogs should celebrate these two important victories, and be ready to continue lending your voice to the greyhounds. If you are able, please also support our efforts financially as well. Donations are needed to fund our lobbying efforts and give the greyhounds a voice in every racing state. Just this week, we will have personally advocated for an end to dog racing by speaking in the legislatures of Iowa, Arizona and soon Florida.

I am optimistic that by joining together we can achieve even bigger wins for the greyhounds in the months ahead!
Posted by CTheil at 4:20 PM