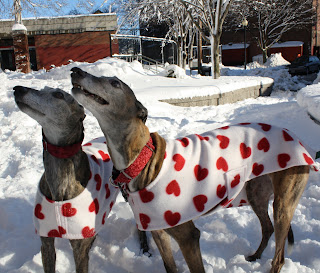 According to a landmark survey released today by GREY2K USA and reported first by the Des Moines Register, a solid majority of Iowa voters support allowing dog racing to end in their state. Specifically, 57% of Iowa voters support a bill to decouple greyhound racing from other forms of gambling, while only 28% oppose this humane law.The survey also includes other important data on greyhound racing in Iowa, and reflects broad and deep support for a humane change. Specifically:
To many people, it may seem surprising that greyhound racing is connected in the law to other forms of gambling like poker, slot machines and simulcast wagering on horse races. Certainly, there is no logical relationship between these different activities. The fact is, greyhound racing is only linked to these other gambling options because of political gamesmanship.

Decades ago, when greyhound racing started to decline, dog track owners fought for the legalization of other forms of gambling as a way to save themselves. When these efforts were successful, greyhound breeders lobbied for "coupling" laws, requirements that greyhound races continue in order for these other forms of gambling to take place. In some cases, they also successfully lobbied for dog racing subsidies, derived from slot machine and other gambling profits.

As a result of these wrongheaded policies, most dog tracks today are losing money on greyhound racing, but continue to hold dog races because they must do so in order to offer more profitable forms of gambling.

This year, several state legislatures will consider proposals to "decouple" greyhound racing. These are important bills that the humane community should support, and if these measures become law greyhound racing will be significantly reduced and end altogether in some states.

This should be an area where forces that don't often agree should be able to set aside their differences and work together. For the humane community, the passage of decoupling laws will mean that fewer greyhounds will endure lives of terrible confinement and suffer serious injuries, like broken legs and paralysis. For gambling opponents, this is an opportunity to reduce gambling and continue moving toward the day when one form of gambling -- pari-mutuel wagering on greyhound races -- disappears completely. For racetrack owners, it is a chance to eliminate a part of their business that is costly and goes against the mainstream values of the communities they are located in.

Finally, as greyhound advocates it is important to remember that our job will not be completely finished until dog racing is prohibited in all fifty states. In this context, greyhound decoupling is not the ultimate goal, but rather a very important stop along the way.

The movement to protect greyhounds has more momentum now than ever before, and 2011 could well be the Year of Greyhound Decoupling!