Last week, I wrote about how the Iowa Greyhound Association (IGA) asked people to not adopt from any group that speaks up for the greyhounds.

We have now discovered that this is not a random act by Iowa greyhound breeders, but instead is apparently part of an overall strategy by the greyhound racing industry to enforce a code of silence.

Shortly after I posted about the IGA's dangerous adoption policy, Iowa greyhound breeders posted a response on their website by Marsha Kelly. Ms. Kelly is a political operative who works for the dog racing industry, and has a reputation for scorched-earth tactics. Just in the past few weeks, she has publicly referred to the Governor of Arizona as a "whacked out bitch" and called the Governor of Wisconsin a "weasel."

In her response for the IGA, Kelly restated the dog racing industry's myth about adoption statistics, made various false claims about GREY2K USA, and stated:

"The success of our adoption effort has never and will never depend on the participation of a handful of extremely hostile 'anti-racing' groups. We don't need to depend on the hate-mongers."

Sadly, this wrongheaded attempt to stop people from adopting greyhounds could have real consequences. Despite what Ms. Kelly would have people believe, greyhounds are still being killed when they are no longer profitable. Just a few days ago, dog racing supporter and adoption advocate Pam Davis acknowledged this fact on Facebook:

"There are a lot of dogs not accounted for and we know where some of them went (not to homes)."

In the same discussion thread, a volunteer for Greyhound Pets of America Emerald Coast made a similar statement:

"PE is still euthanizing perfectly healthy dogs. We try to take every one of them but track politics betwn (sic) trainers makes that impossible for us."

Meanwhile, another adoption advocate with links to the industry claimed that healthy greyhounds are not only killed at low end tracks, but also at high-level racing facilities:

This last statement is particularly troubling, and goes to the heart of the issue. Even some members of the dog racing industry know that greyhounds are being killed, and want to see change. They don't speak out, however, because they are afraid of facing retribution. According to dog racing supporter Myke Stewart:

"I can't say much of anything here, since I still have family with viable interests in the racing industry and would do NOTHING to jeopardize their standing or jobs." 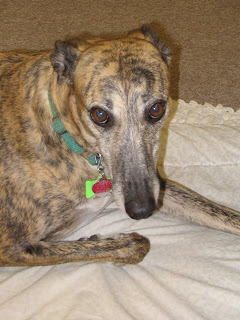 That is the real game that is being played. The greyhound racing industry and its spin doctors, like Marsha Kelly, are apparently willing to go to any lengths to hide the truth about their cruel practices. For years, they have intimidated industry members who seek change, and are now doing the same thing to any greyhound adoption group that speaks up for the dogs.

This behavior is outrageous, and proves yet again that the greyhound racing industry is willing to put its financial interests ahead of animal welfare. On this issue, I agree with a comment made by adoption volunteer Julie Richardson Costello, who was responding to some of the statements cited above:

"For crying out loud. Be the voice for those that cannot speak. Sounds like the pathetic Penn State scandal. All the witnesses and ears looking the other way."

Well said, Julie. I couldn't have said it better myself.
Posted by CTheil at 12:48 PM