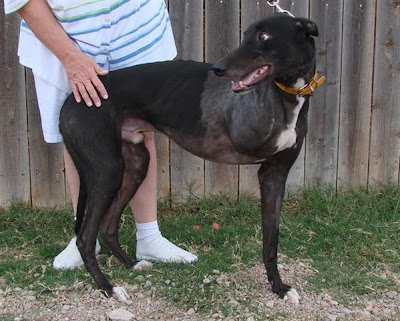 Researchers at Massey University in New Zealand just completed a five-year study of issues related to the greyhound racing industry. Not surprisingly, their conclusions provide even more evidence that dog racing is cruel and inhumane.

According to an abstract for the study, which was conducted between 2007 and 2011:

"We identified that hock injuries were the single most important cause of catastrophic failure and dog loss. The combination of training practices, questionable feeding practices, and the suspicion of stress-induced fractures was also a significant cause of dog loss."

In particular, the study found that training and racing on an oval track actually changes a greyhound's bone density, and results in microfractures:

"An initial subjective assessment has revealed asymmetry between the bone density of the left/right central tarsal bones, as the result of track running, and increases in bone volume and density following training. Also, microfractures appear to result during training."

Finally, and perhaps most notably, the study found that the bone density changes that take place during training may cause greyhounds to be predisposed to a later catastrophic injury:

"We are uncovering the early changes in bone that occur after the onset of training, and which may predispose it to catastrophic fracture later."

Greyhound breeders often claim that catastrophic injuries are mere accidents they are not responsible for. In their own words, a broken leg is "no big deal." This new study provides even more evidence that this is simply not the case. Catastrophic greyhound injuries are an entirely predictable result of this cruel industry. As long as dog racing continues, thousands of greyhounds will suffer broken legs and die on the track.
Posted by CTheil at 1:44 PM