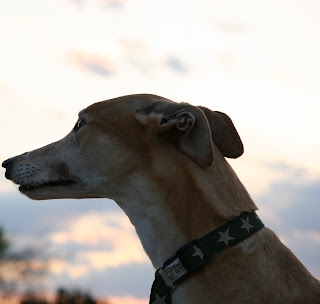 In state legislatures across the country, bills to reduce or eliminate greyhound racing are moving forward. This is wonderful news for greyhound advocates, and is further proof that the end of dog racing is inevitable.

This positive momentum, however, has once again caused greyhound breeders to resort to the worst kind of scorched-earth tactics. The most egregious example of their desperation is from Iowa, where dog racing supporters are now telling people not to adopt greyhounds from any organization that speaks up for the dogs.

In the current edition of its newsletter, the Iowa Greyhound Association (IGA) published a rambling, full-page diatribe urging greyhound adopters to support the continuation of the industry. This is not surprising, because the IGA represents greyhound breeders. They have a direct financial interest in defeating the common sense legislation now pending in the Hawkeye State, which would both end greyhound racing and eliminate millions in annual subsidies dog racing supporters now receive.

What is shocking, however, is the means that greyhound breeders are using to try to preserve their multi-million dollar subsidy. To start with, the IGA tries to use the personal connection greyhound adopters have with the dogs they have rescued to perpetuate the cruelty of greyhound racing: 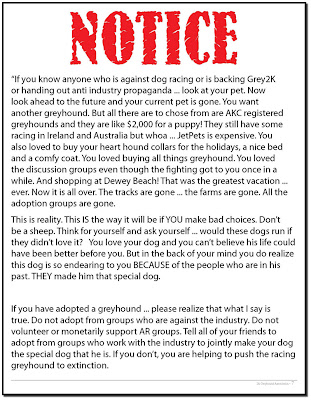 "Look at your pet. Now look ahead to the future and your current pet is gone. You want another greyhound. But all there are to choose from are AKC registered greyhounds and they are like $2,000 for a puppy! They still have some racing in Ireland and Australia, but whoa ... JetPets is expensive."

I suppose if this were a television drama, we would be seeing dark storm clouds and listening to dramatic music just about now. Continuing with the IGA sales pitch:

"You also loved to buy your heart hound collars for the holidays, a nice bed and a comfy coat. You loved buying all things greyhound. You loved the discussion groups, even though the fighting got to you once in a while. And shopping at Dewey Beach! That was the greatest vacation ... ever. Now it is all over. The tracks are gone ... the farms are gone. All the adoption groups are gone."

After all this emotional nonsense, the IGA then tries to close the deal:

"This is reality. This IS the way it will be if YOU make bad choices. Don't be a sheep."

Finally, the IGA makes the most shocking statement of all:

"Do not adopt from groups who are against the industry."

For decades, greyhound breeders have used these dogs for their own personal financial gain. For most of the industry's existence, they simply killed the dogs when they were no longer profitable. In recent years they have started to pawn dogs off on adoption groups, allowing the dogs to find homes and have a second life. This is certainly an improvement, but does not address the underlying problems in the industry, including the cruel housing system the industry uses and the large number of dogs that are injured while racing.

Now, the same greyhound breeders who have asked adoption groups to clean up after them want the rescue community to be thankful. Even worse, they want to cut off adoptions by any group that has the courage to speak up for the dogs. This manipulative behavior should not come as a surprise, but is shocking nonetheless. This political tactic could directly result in greyhounds not being adopted, an outcome that is apparently not important to the IGA.

Dog racing is cruel and inhumane, and is going to end. When it does, thousands of greyhounds will no longer endure lives of confinement and suffer serious injuries. Further, I have a feeling that many of the people who currently rescue greyhounds are looking forward to the day when they no longer have to clean up after irresponsible greyhound breeders. I'm sure they have many other important things in their life they would like to do, and other noble causes to pursue.

It's also important to note that the greyhound breed has existed for hundreds, if not thousands of years, long before the dog racing industry. The notion that greyhounds are dependent on this cruel industry is pure nonsense.

The end of greyhound racing will be a victory for everyone who cares about dogs. Beneath their manipulative tactics, even the greyhound breeders know this. That is why I am confident their political tricks will not work. In the end, the greyhounds will overcome.
Posted by CTheil at 2:19 PM