State Inspection: Ticks "Crawling up the Wall" in Kennel at Tucson Greyhound Park 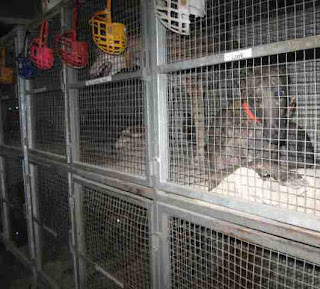 With each passing month, more evidence emerges of humane problems at Tucson Greyhound Park.  Last week, we received new state records that document neglectful conditions in one of the track kennels, as well as an ongoing problem with greyhound injuries.

According to a March 6, 2012 Arizona Department of Racing Stewards Report, a state inspection revealed "ticks crawling up the wall" in the Brian Lewis Kennel:


"Brian Lewis kennel had ticks crawling up the wall behind the crates during a State Inspection and TGP Management told State Officials that the kennel would be addressed as far as cleanliness and to this date nothing has been done."


"After nothing was resolved from a meeting with the GM and trainers/owners, some trainers/kennel operators are now holding the State responsible for all the injuries at Tucson Greyhound Park.  As you can see there are 7 scratched greyhounds tonight 'ALL LAME'"

Later in the report, state officials indicate that one kennel owner contacted them directly to voice her concerns:


"Donna Mann called the Stewards off the roof to talk about the out of control injuries.  She has a list of 17 injuries which she gave to management, the racing office, and left copies in the racing office titled 'DAN' and the Director of Racing asked 'why do you need him it's our issue' and to date Dan Reinertson has not received copies."

Finally, it's important to note that this Stewards Report also provides evidence that track management is indifferent to humane problems at Tucson Greyhound Park.  Reading through the records, a sad pattern emerges.  The state documents neglectful conditions in a track kennel, management tells the state they will address it, but then nothing happens.  Kennel owners hold a meeting with management about injuries, but "nothing (i)s resolved."  A kennel owner takes her concerns about injuries directly to state officials, but the track Director of Racing discourages her from reporting the problem.

This indifference by Tucson Greyhound Park management is part of the problem.  It proves that the track is incapable of being a good corporate citizen, and cannot be trusted to resolve even the most basic humane issues at the facility.  That is why it's time for Arizona lawmakers and voters to step up and help the greyhounds.  If they don't, no one will.
Posted by CTheil at 3:21 PM