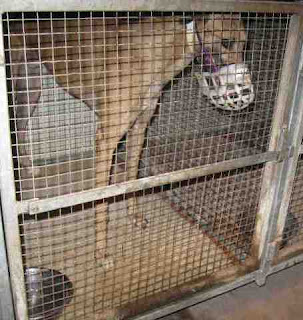 "In morning's early light, Dr. Joe Robinson pokes the syringe in a tiny bottle, raises it above his head and draws back the plunger. Robinson apparently doesn't wish to publicize his finesse; each time I try to photograph this handiwork the longtime veterinarian spins his back to me."

Even though this harmful practice was outlawed by South Tucson voters, it is continuing at Tucson Greyhound Park. To circumvent the law, the dogs are taken to a parking lot just outside city limits to be injected. It is outrageous that Tucson Greyhound Park would so blatantly ignore the will of local voters.

Most importantly, it is deeply troubling that female dogs at Tucson Greyhound Park are still being given an anabolic steroid to prevent estrus. According to Care of the Racing and Retired Greyhound, there are several side effects of this dangerous practice:

"The adverse side effects of male-derived hormonal preparations are increased aggression which can result in fighting during trialing or racing; increased weight due to water retention; occasional loss of vigor; and virilization. The latter is evidenced by vulvar swelling, enlarged protruding reddened clitoris, and a clear to cloudy mucoid discharge from the vulva and mats the hairs under the tail where contact is made."

Thankfully, a humane proposal is now moving through the Arizona legislature that could significantly reduce racing at Tucson Greyhound Park. Because of the progress of this good legislation, I am hopeful that positive changes will come soon at the Tucson track.

Track management, however, should be on notice. The status quo is no longer acceptable at Tucson Greyhound Park. If reforms do not come soon, the humane community will have no choice but to take our case directly to the statewide ballot box. The greyhounds in Tucson need help, and cannot afford to wait any longer.
Posted by CTheil at 3:50 PM