Dog Race Gambling Drops for Twenty Years in a Row 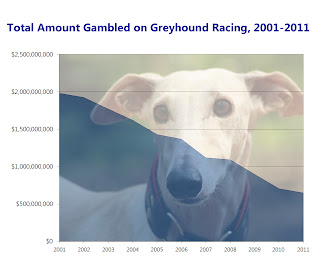 According to new data that has been released by the Association of Racing Commissioners International, gambling on dog races has now declined for twenty consecutive years.

The most recent wagering numbers that have been released are for calendar year 2011. In that year $648 million was bet on greyhound races, on both live racing and simulcasting. This figure represents the total amount bet, not profits, and the vast majority of those dollars were returned to gamblers as winnings.

In just the past decade, betting on dog races has dropped by a staggering 67%. During the same period state revenue from greyhound racing declined by more than 80%, and dog races now provide only $14 million in tax revenue nationwide. Taking into account the millions that states spend every year regulating greyhound tracks, it is very likely that taxpayers are actually losing money on the activity.

As I wrote previously, the last year that dog race gambling increased was 1991. Since then, greyhound gambling has declined by 81.5%.

Whether greyhound breeders like it or not, this cruel industry is on its way out. The only question left is how many dogs will suffer and die before greyhound racing ends completely.
Posted by CTheil at 4:53 PM