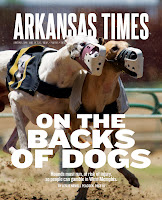 This morning, information on greyhound injuries in Arkansas was made public for the first time in a front-page Arkansas Times news story.

During the same period, 32 dogs died or were euthanized due to injuries at the track.

This new injury data also tells the sad story of individual dogs who suffered and died at Southland. For example:

These dogs were never given the chance to know a loving home. Rather than become part of a family, they raced so that gamblers could use them as a number to bet on. In the end, each of them suffered a catastrophic injury and paid the ultimate price of their lives.

Please read our full report on greyhound injuries at Southland Park, and check out today's Arkansas Times report. Then, tell others about the ongoing humane problems at Southland. If you have friends or family that live near the track, ask them to not support this facility.

We can't help dogs like Rockabilly, but we can try to help the greyhounds at Southland now. That starts with giving them a voice, and spreading the world about their cruel fate.
Posted by CTheil at 4:27 PM