Jack Sprat, the Blind Greyhound Who Was Forced to Race, Finds a Loving Home 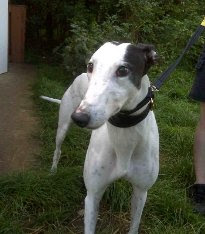 Two weeks ago I wrote about Jack Sprat, a British greyhound who was forced to race despite the fact that he is blind. Jack's sad story was widely reported in the United Kingdom. According to the Daily Mail:

"When Jack Sprat the greyhound came in last in every race in which he competed, his owners thought they had a dud. But in fact, he did well to keep up with the pack at all because it turns out Jack is almost completely blind and couldn't see the rabbit."

As heartbreaking as this story is, it has a happy end. This morning, the Mirror reported that Jack has found a loving home. He has been adopted by a couple who read about his plight and decided to help him. According to adopter Sue Forrest:

“I wanted to give him a caring home, he is such a beautiful dog. We are amazed at how quickly he has settled in and we feel so lucky we got to look after him.”

Apparently, Jack's challenges are not completely over. According to his new family he has difficulty with loud sounds:

"He is terrified of noise, it reminds him of the race crowds. We cannot take him to town yet as he gets beside himself. He shakes. But Jack is so affectionate."

It is absolutely wonderful that Jack has found a loving family to live with. I wish Jack the best of luck in his new home and would like to congratulate everyone who helped him, including the Mirror, the Dog's Trust, and of course Sue and Adam Forrest.

Your work to help Jack is an inspiration to everyone across the globe who cares about greyhounds and strives to make a difference.
Posted by CTheil at 10:03 AM