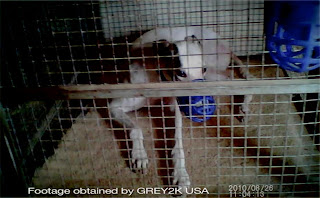 At the beginning of the year, I included the closure of Tucson Greyhound Park as one of my seven wishes for the greyhounds in 2011. Simply put, Tucson is a place where greyhounds go to suffer and die. Kennel conditions are even worse than at most other dog tracks, and greyhounds routinely suffer serious injuries like broken legs.

That is why I was not surprised to learn of yet another case of neglect at Tucson. According to records we have received from the Arizona Department of Racing, a kennel inspection at the track on June 11 uncovered several humane problems. According to the inspection report:

The kennel also "could not produce a log" indicating the ultimate fate of greyhounds that had raced for the kennel. Finally, the trainer responsible for the dogs, Willard J. Eyler, refused to sign the inspection report.

Obviously these are real problems that need to be addressed, and the state investigator was correct in raising them as issues. After the investigation report was filed, the case then went before the Tucson Greyhound Park Board of Judges for further action. What happened next may be the most troubling aspect of this entire incident.

After receiving the investigative report, the Board of Judges took no action against Eyler, other than giving him a "warning."

I am deeply disappointed by this decision, and to me it is yet another example of why Tucson Greyhound Park must close. In Arizona, attempts to make life better for greyhounds through regulatory efforts have repeatedly failed.

That is why it is so important that we continue fighting for Arizona's greyhounds. We made tremendous progress this last legislative session, and have not ruled out taking our case directly to voters. One way or another, Arizona's greyhounds must receive the help they deserve.