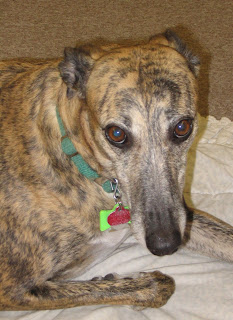 Last month, the Sarasota Herald-Tribune reported on the death of a 23-month-old greyhound named Raiders Uncle Mo, who died at Sarasota Kennel Club after he fell into the racetrack rail during a February race and was apparently electrocuted.

During its work on this report, the Herald-Tribune spoke to track Director of Racing Thomas Bowersox. To our great surprise, Bowersox told the newspaper that Sarasota Kennel Club's injury reports were open to public inspection. According to the story:

'We don't announce injuries or deaths -- you can understand that,' Bowersox said. 'We do have accidents, just like horse racing and auto racing. But we're not trying to hide anything.'

'I would prefer not to send (injury reports) to (Theil), but he's welcome to come down and take a look.'"

Within days, GREY2K USA President Christine Dorchak wrote directly to the track and accepted its invitation to inspect these documents. In part, she wrote:

"I am happy to arrive at the track at whatever time you prefer, and look forward to hearing from you so we can make arrangements. If you do not respond to this letter, I will plan on arriving at approximately 11:00 AM."

However, only two days before we were scheduled to inspect the Sarasota injury reports, Director Bowersox called our office and said that he needed to reschedule due to an unspecified personal issue. We complied with this request, and informed him that we would instead inspect the documents on May 29. This provided the track with more than three weeks advance notice.

Can you guess what happened next? A week later Bowersox called Christine again, and stated that he had absolutely no intention of allowing us to inspect the track's greyhound injury reports. He also stated that he felt "threatened" by the possibility that this injury data might be published in the Herald-Tribune.

In hindsight, it's now clear that Bowersox simply lied to the newspaper. The track never had any intention of allowing greyhound injury reports to be inspected by GREY2K USA or anyone else. Director Bowersox told the Herald-Tribune a feel-good story about track policies that had absolutely no basis in fact.

The bottom line is that citizens have a right to know how many greyhounds are being injured at these tracks. When Florida lawmakers consider this issue next year, they should keep in mind the extreme lengths to which dog race promoters have gone to hide this important data. When it comes to injuries, they will apparently say anything to keep the public in the dark.