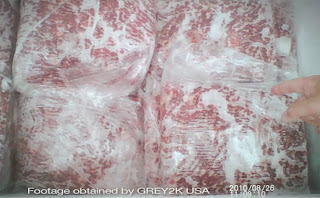 At racetracks across the country, greyhounds are routinely fed raw 4-D meat from animals that are dying, diseased, disabled or dead. This meat is deemed unfit for human consumption and contains denatured charcoal to discourage human use.

The use of this meat may not be the most egregious practice in the racing industry, but it is a typical example of greyhound breeders trying to maximize their profit margin. With every dog, their goal is to derive as much profit as possible while incurring the least amount of costs. Even the industry handbook Care of the Racing and Retired Greyhound, acknowledges that this meat is used because “it is the most economically feasible for the Greyhound industry at this time.”

Greyhound breeders often argue that 4-D meat is also used for pet foods, and that is true. However, pet food manufacturers cook the meat to remove pathogens. By contrast, greyhound breeders feed raw 4-D meat to dogs. Many breeders even believe that cooking the meat would cause greyhounds to be less competitive.

This is a critical distinction that has ramifications on the health and welfare of greyhounds. For example, a 2006 study published in the Journal of the American Veterinary Medical Association examined Salmonella enterica infections at a greyhound breeding farm. According to the study:

"Although such meat is an inexpensive source of protein, it has the potential to expose animals to many pathogenic microorganisms, including Salmonella spp, Campylobacter jejuni, and Escherichia coli, especially when fed raw."

The study was conducted after there was an outbreak of diarrheal disease and death among young puppies at the farm. In total, 133 samples were taken at the facility of which 88 (66%) tested positive for Salmonella enterica. The study concluded:

S enterica infections and environmental contamination were common at this facility. A portion of the Salmonella strains detected on the premises was likely introduced via raw meat that was the primary dietary constituent. Some strains appeared to be widely disseminated in the population. Feeding meat that had not been cooked properly, particularly meat classified as unfit for human consumption, likely contributed to the infections in these dogs.

Feeding dogs raw 4-D meat as a way to cut costs is reckless. Taken together with confinement greyhounds endure, the injuries they suffer, and all of the other problems in the industry, it's clear that dog racing is cruel and inhumane and must end.
Posted by CTheil at 3:49 PM