Will November 6 be Greyhound Independence Day in Florida? 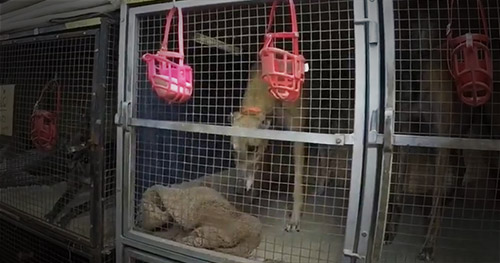 By Fred Barton, GREY2K USA Worldwide Board Member
In just a few days, the voters of Florida will have a chance to put the archaic, economically unsustainable and dying business of dog racing to rest. If Amendment 13 passes it will phase out this cruel activity by 2020. Florida is home to 11 of the remaining 17 tracks in the United States, so ending racing there will go a long way to freeing greyhounds trapped in racing compounds all over the country.
The campaign to end racing has been contentious. Racing supporters have pulled out all the stops in their campaign of intimidation, personal attacks and scare tactics. It comes as no surprise that this would be their strategy since there is no cogent defense of the heartless commodification, exploitation, and eventual abandonment of innocent, helpless greyhounds. These dogs are brought into this world for the sole purpose of making their owners money. They live in cages at the kennels where their lives are regularly and knowingly put in danger by those owners, and when they can no longer make money, they are discarded by these same owners.
That by itself should be enough to vote #YesOn13, but there are other reasons as well. The racing industry argues that it is one of the most highly regulated businesses in the country and that mistreatment of any greyhound is quickly ferreted out and the perpetrator punished. In practice, however, kennel workers who violate the rules are often given a slap on the wrist and allowed to return right back to the track. Thankfully, multiple violations do seem to attract more rule enforcement by state regulators. At Orange Park Kennel Club, for example, Charles F. McClellan was charged with eighteen greyhound cocaine positive infractions, six belonging to the same dog, which resulted in his suspension. McClellan's replacement, Natasha Nemeth, was also cited with six greyhound cocaine positive violations, two from the same greyhounds testing positive under McClellan’s supervision. She was likewise suspended, but both are currently fighting to overturn the state's order.
The industry has a history of fighting regulations that are simply a matter of common sense. In Seminole County, Florida an ordinance passed in 2016 that allowed greyhound kennels to be inspected by local officials for the first time, required that individual dogs be registered (just like all other dogs in the jurisdiction) and mandated public reporting of greyhound injuries. The industry fought this all the way, eventually losing in court. The Florida Greyhound Association has just appealed this ruling, however. Keeping the facts about dog racing a secret is job #1 for those who want to keep cashing in on the greyhounds. For years the legislature has tried to pass bills regulating the reporting of injuries statewide, and in each case greyhound breeders passionately organized to block them. It seems there are certain aspects of greyhound racing the industry just doesn’t want made public …
But even if more regulations could be passed, they would be toothless without enforcement, and enforcement is expensive. Inspectors have to be hired, support staff has to be maintained, and a mechanism developed to apply the law and punish those who flaunt it. This costs money and there is little of that left in greyhound racing. In 2013 for example, the state contracted with the Spectrum Group to do a comprehensive study of gambling in Florida. Analysts found that state taxpayers lose from $1 - $3.3 million a year because the cost of regulation exceeded tax revenue. More recently,Tony Glover, former Director of Pari-Mutuel Wagering at the Florida Department of Business and Professional Regulation wrote that, "[o]ver a ten year period, the amount of state revenue, state and licensing fees that flow to the state, dropped from about fourteen million to about two million.”
There is a more fundamental reason that regulation will not work, however, that transcends simple economics: regulations only treat the symptoms, not the cause. To the racing industry greyhounds are merely a means to an end, and that end is profit. They are not viewed as living creatures capable of feeling joy, or pain, but more like machines that while functioning are maintained in the most cost effective way possible, and when they stop functioning are discarded and replaced by another. This is the cruelty that hides at the center of greyhound racing and no amount of regulation will ever change it.
Greyhound racing is a dying industry. In Fiscal Year 2016, the total amount gambled on live racing at Florida dog tracks was $87,738,338. This amounts to a decline of 55% since 2006. Between 2001 and 2014 (the last year the industry will openly publish its numbers), state dog race wagering declined by more than 82% across the country. As revenue to the state dries up, the ability to do enforce even minimal regulations become even more challenging. This also puts the greyhounds in more danger because the temptation to cut corners becomes greater as the money pie shrinks. The voters of Florida have an opportunity to end this institutionalized cruelty. Let's make next Tuesday, November 6, a true Greyhound Independence Day by passing Amendment 13 on the ballot.
Posted by Fred Barton at 12:45 PM