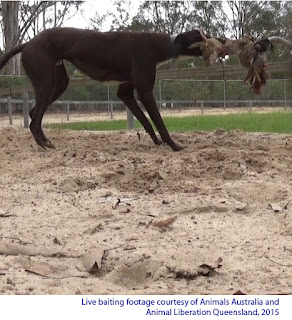 In Australia, even the racing industry itself has recognized that fundamental change is necessary to improve greyhound welfare. This point was made repeatedly in our direct meetings with industry leaders, who surprisingly acknowledged the fact that dog racing is out of touch with mainstream values.

This disconnect was highlighted again last week, in a report released by the Working Dog Alliance Australia and funded by industry body Greyhound Racing New South Wales. Several of the report's findings have already made headlines, including the acknowledgement that an estimated 40% of greyhound puppies bred for racing never make it to a track.

The most notable finding, however, is the suggestion that greyhound racing may be rightly classified as a blood sport. The report defines these as "activities where the death of an animal is a likely, if not guaranteed, outcome of the entertainment," such as "bull-fighting, dog-fighting, cockfighting, coursing and a number of other sports that are still 'played' in the world today, despite vocal protest against them." The report then points out that although dog races in themselves do not always cause death, "violence and abuse can manifest in different contexts across the lifecycle of the greyhound, including breeding, rearing, training/racing, housing and racing career end-point." Finally, it concludes:


"As such, the physical abuse, risk of injury and culling mean that greyhound racing has a likely, if not guaranteed, risk of death for the participating dog, which means some would classify it as a blood sport."

In the coming years there will be a major push to increase adoption in Australia and end the unnecessary killing of unprofitable greyhounds. We must all support this effort. At the same time, it's unclear whether such a transformation is attainable. Australia has a population that is equal to only 7% of the U.S. population, but a racing industry that is similar in size to its American counterpart. As a result, the number of available homes for rescued greyhounds is far more limited.

Sadly, while industry leaders fight for change, the response from other participants has been abysmal. Just a few days ago, NSW regulators were allegedly shot at and assaulted during a routine inspection. Afterward, former trainer Tony Vass told ABC News that there is widespread anger among greyhound trainers who believe they are being "bullied." These trainers are nothing short of delusional. They are whistling while walking past the graveyard, convincing themselves that somehow they are in the right, while the broader community rejects their cruel blood sport.
Posted by CareyTheil at 1:39 PM