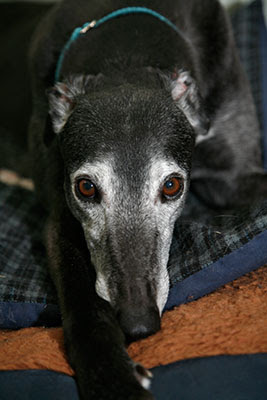 Earlier this month, the Charleston Daily Mail reported that assistant greyhound trainer James Grace had his state license revoked after a greyhound named Kiowa Dutch Girl suffered a broken leg and was denied veterinary care. The newspaper's story was based in part on information from GREY2K USA.

We are grateful that the Daily Mail shed light on this case, and also that the West Virginia Racing Commission took action against Grace and another individual. However, this should not be the end of the story. After examining the full case file, it's clear that Grace should also be charged under the state law against cruelty to animals.

In a sworn statement to state regulators, Grace admitted that he made the decision to not provide Dutch Girl with veterinary care. Incredibly, he tried to rationalize his poor choice by claiming that he was doing the best thing for Dutch Girl, and said that he has seen many other injured greyhounds be denied treatment:


"I know the dog owner, Kay Smith who owns a lot of dogs, and Bob Mackey the kennel owner, or the GPA wouldn't pay for the surgery ... I've been working with greyhounds for 35 years and I've seen many breaks over the years where dogs were not taken to the vet and they healed naturally and given away as pets."

Meanwhile, Dutch Girl suffered for at least three days before state officials intervened. According to a sworn statement from a witness:


"The whole rear (right) leg was swollen, she couldn't even get out of the cage. I had to lift her up and carry her out to go to the bathroom, and when her leg touched the floor she cried, and she was constantly panting as if she was exhausted."

West Virginia law states that it is illegal to intentionally withhold "medical treatment, necessary to sustain normal health and fitness or to end the suffering of any animal." In the coming weeks, we will encourage the proper authorities to investigate this case and take further action. All individuals who willfully neglect greyhounds must be held accountable in a court of law.
Posted by CTheil at 4:24 PM