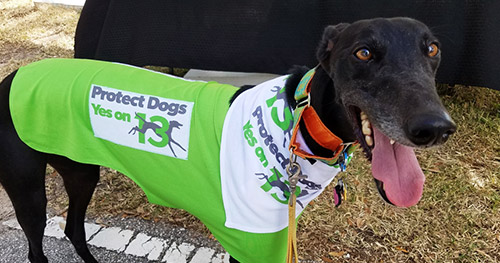 The voting is over. The ballots have been counted and the overwhelming majority of people in Florida have decided to free innocent greyhounds from exploitation, needless injuries and painful deaths. When Amendment 13 was first approved for the ballot in April, there were 12 operating dog tracks in the Sunshine State. A track in Miami decided to close before the vote was even taken. Four more tracks have likely run their last seasons this year and will simply not reopen for live racing ever again. The number of dogs in Florida racing kennels is always in flux, but there were 3,700 active, registered racers as of October and they will continue racing over the two year phase-out triggered by Amendment 13. Some dogs will be sent to tracks outside the state and others will be sent to farms in the Midwest as breeding stock. Let's face it, this is an industry that will always look to make the last dollar it can off the backs of innocent greyhounds. That reality will never change. It is notable that racing proponents continue to claim that 8,000-10,000 greyhounds will become “homeless” with the end of dog racing. Of course, those of us who have been to the concrete warehouses known as racing kennels know that these greyhounds have never had a home to begin with.

During the campaign to pass Amendment 13, greyhound breeders relied on a strategy of dissembling, denying and distracting to hide the cruelty at the center of their business. It didn’t work. Amendment 13 passed with 69% of the vote, a vote that cut across party lines, geographic areas and income levels. It seems the one thing the people of Florida could agree on this election cycle was that greyhound racing had to go.

None of this appears to have had an effect on the racing industry, however, as racing apologists are still trying to sell the same tired distortions, half truths and outright fantasies that got them nowhere on Election Day. Let’s take a look at some of the more popular ones:

Claim #1. The greyhound breed will die out. This is just silly. Greyhounds are among the most ancient breeds, the only dogs named in the Bible. Commercial dog racing has existed for just 87 years. Additionally, most dog breeds today don’t do what they were originally bred for. Most Border Collies don’t herd; most Terriers don’t chase rats; most Poodles don’t hunt ducks or sniff out truffles and yet they all seem to be doing quite well. Expecting greyhounds to disappear because racing ends is like expecting horses to disappear because the internal combustion engine was invented. Greyhounds make wonderful companions. There’s no reason to expect that their transition to full time pets would be any different than any of the other breeds whose original jobs became obsolete.

Claim #2. Thousands of greyhounds will be euthanized because they can’t find homes. Simply, no. There will be an influx of greyhounds coming into the adoption system, but it won’t be until the end of 2020. Until then the stream of dogs coming off the tracks is likely to be somewhat less than what it always was, because five tracks are already off the table. In addition, the industry boasts 102 adoption groups approved and ready to take dogs as they become available. This list does not include the large number of adoption groups that have been blacklisted because of their anti-racing stance, but who are ready, willing and able to take dogs as well, if only they would be allowed. In what seems to be a final measure of selfishness, there are those in the industry who not only won’t release dogs to adoption groups with an anti-racing stance, but even want to keep dogs from individuals wanting to adopt if their views are not in line with pro-racing positions. This makes all their hand-wringing about what is going to happen to all these poor dogs looking for homes seem somewhat hypocritical.

Claim #3. There will be massive economic upheaval. Again, simply not true. Florida has the fourth biggest economy in the country with a GDP last year of $967.3 billion. Greyhound racing actually costs the state more to regulate than it generates in taxes. Most jobs in dog racing are part-time, low-wage, and offer no benefits. While no one wants to see job loss, there is little evidence to suggest any widespread damage to the economy related to the predictable end of dog racing. Tracks now lose $34 million a year on live racing and as they raze their old tracks and replace them with new hotels, concert centers and more, there will be net job growth.


Claim #4. Amendment 13 was only the tip of the iceberg. Hunting and fishing will be next. This breathless delusion was promulgated by the Florida NRA, an organization so paranoid and afraid of anything different that I’m surprised they haven’t issued a statement decrying the change in the seasons as a threat. Amendment 13 was about greyhound racing and that is all. The Florida Supreme Court concluded that ending racing was the single purpose and goal of the amendment. To make the leap from racing to hunting, fishing and guns was more a measure of the industry’s desperation than a logical outcome.

You would think that given their massive failure at the ballot box, pro-racing interests would try a different approach now that voters have spoken so decisively. Think again. In their minds, it’s almost as if the election had never happened. They stick to the same distortions, long ago debunked talking points and personal attacks that got them nowhere during the campaign. It will be up to those of us who truly care about the well being of greyhounds to ensure that they are finally given the second chance they deserve.
Posted by Fred Barton at 4:58 PM