Greyhound Trainer Asks That Dog Be Killed Because of His Gender 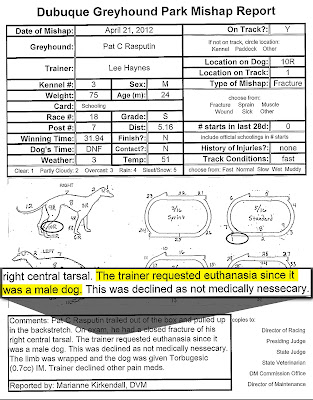 This morning, I asked the Iowa Racing and Gaming Commission to open an investigation into an incident involving a greyhound named Pat C Rasputin.

On April 21, the two-year-old dog suffered a broken leg at Dubuque Greyhound Park. What happened next is deeply disturbing. According to state veterinarian Dr. Marianne Kirkendall:

"The trainer requested euthanasia since it was a male dog. This was declined as not medically necessary. The limb was wrapped and the dog was given Torbugesic (0.7cc) IM. Trainer declined other pain meds."

In my request for investigation, I asked the state to ascertain the ultimate fate of Pat C Rasputin, and indicate whether trainer Lee Haynes violated any racing rules or state laws by requesting that a dog be killed because of his gender. Also, I have requested that regulators determine whether this is a common request at Iowa tracks. According to state records, 24 greyhounds were euthanized in the state between January 2011 and July 2012. Of these, 62.5% were male dogs.

Dr. Kirkendall should be applauded for denying the callous request that Pat C Rasputin be killed simply for being a boy. At the same time, this is a sad example of how dog race promoters put personal profit ahead of animal welfare. Commercial greyhound racing goes against the values of our community, and it's time for it to end.
Posted by CTheil at 4:57 PM