"The Greatest Producer Ever" 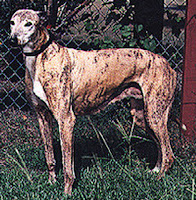 As part of our work at GREY2K USA, we closely monitor the greyhound racing industry. During this process, we frequently learn about industry standard practices and hear stories about past champion greyhounds.

One sad example of a past champion greyhound is the story of Buzz Off. Born on January 15, 1984, Buzz Off was a brindle greyhound who was owned by greyhound breeder Ron Beckner. She was not successful as a racer, but was eventually inducted into the Greyhound Hall of Fame for her work as a brood bitch. During her life, she was bred 11 times and gave birth to 79 puppies. Two of her puppies won more than $500,000 in combined winnings.

In summary, Buzz Off was inducted into the Greyhound Hall of Fame because the racing industry made so much money off of her and her puppies.

Even more details about Buzz Off were recently disclosed in an on line discussion over at American Greyhounds, an internet forum used by the dog racing industry. In this discussion thread, titled "The Greatest Producer Ever," it was disclosed that Buzz Off only raced five times before suffering a broken leg, and was later bred "brother to sister in second generation." Here are a few excerpts:

"This dog was an act of God really. How many dogs would you ever see bred 11 times and produce unreal hall of fame dogs time after time."

"She almost wasn't bred back then. She had five races and two wins at Sarasota then broke her leg."

"In a conversation I had with Ron Beckner years ago, he said he really wanted to breed to Perceive ... He had debated on breeding Buzz Off at all, but when she came in, he said he called to see if Perceive was available out of habit and to his surprise he was. At that point he said he didn't care anymore if this was his worst brood prospect, Perceive was available and he was breeding to him. The funny part was that it was only after he hung up the phone that he thought to look at their pedigrees. He said his heart sank when he saw he was breeding brother to sister in the second generation, but then decided what the hell, he'd waited that long to get Perceive and he was going to go ahead with it."

"I just love reading these kinds of stories. Thanks Martin for all the info and thanks Remo for posting in the first place ... Does anyone know what became of Buzz Off after she was done raising her puppies?"

This discussion underscores the selfish view that greyhound breeders hold when it comes to these magnificent dogs. First and foremost, dogs are judged on their ability to generate a profit. If a greyhound generates revenue, either as a racer or breeder, the dog becomes an "Act of God." Their welfare is always a secondary concern.

I don't know what happened to Buzz Off (pictured at right and above), although records show that she was still being used as a puppy "producer" a few months before her tenth birthday. I hope she was given a few years respite on a couch somewhere. She certainly deserved it.
Posted by CTheil at 3:06 PM